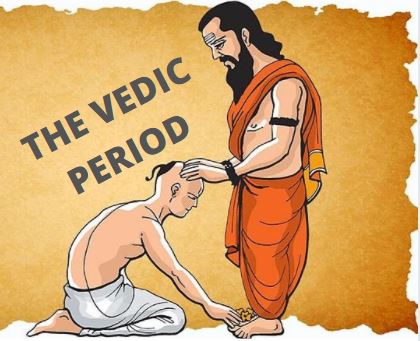 The Vedic Period and Literature

What is the Vedic Period ?

The Vedic period is the period in the history of India when the Vedas were composed. This period started around 1500 B.C. with the arrival of Aryans to north-western parts of India. Their initial settlements were in the valleys of the north-west and the Punjab plains. Later, they moved further into Indo-Gangetic plains.

The Vedas composed during this time are the main source of information about this period.

Aryans were not a separate race but a linguistic group of semi-nomadic pastoral people who spoke a common Indo-Aryan language – ‘Vedic Sanskrit’.

The original home of the Aryans has been a controversial question and hence, there are several theories given by different scholars.

Central Asiaan theory propounded by Max Muller suggests that the original home of the Aryans was in the Russian steppes lands and the area around the Caspian Sea. From there, they gradually migrated to different parts of Asia and Europe and entered India in about 1500 B.C.

Bala Gangadhara Tilak argued that the original home of the Aryans was the Arctic region.

Swami Dayanand Saraswati in his famous Satyarth Prakash propounded that the original home of the Aryans was Tibet.

However, the theory of southern Russia is widely accepted by historians.

Not much. We have a very limited archaeological evidences which prove the migration of Aryans.

There are also few similarities in hymns of Rig-Veda and Avesta (Sacred book of Zorastrians ).

These similarities make historians think that these people might have originated from the same area but migrated to different places.

When the Aryans migrated towards in indian subcontinent, they initially settled in the region called ‘Sapta Saindhava’ which included Afghanistan, Swat Valley of Punjab and some parts of the Indo-Gangetic plain.

‘Sapta Saindhava’ derives its name from seven rivers flowing through that region( Indus and its five tributaries + Saraswati ).

The period from 1500 BC to 600 BC is considered as Vedic Period which is divided into two parts :

We will study about both of periods in great detail. But first let’s study about the most remarkable feature of this time – The Vedic Literature.

The Vedic literature has been broadly classified into two categories –  Shruti and Smriti.

Shruti  literally means ‘that which has been heard’. They are the most-sacred assemblage  of Hindu literature.  They are considered to be the product of divine revelation which have been heard and transmitted by sages since the time immemorial. Hence they are considered divine and eternal.

Smriti literally means ‘that which is remembered’.

They are the post Vedic Classical Sanskrit literature which are considered less authoritative than Shruti. They are supplementary work and might change over time.

Lets now study the shruti literature in detail as they are more sacred, canonical(and also important for our exam).

The term ‘Veda’ literally means ‘superior knowledge/supreme knowledge/knowledge storehouse’. They are the most sacred and authoritative text among all the Vedic literature. Vedas are also called Apaurasheya ( Not created by man but god gifted) and Nitya ( existing till eternity).

There are four Vedas:

Let’s know more about them.

It is a collection of 1028 hymns which were sung in praise of different Rig-Vedic gods.

Third Mandala of Rig Veda contains the famous Gayatri Mantra which was compiled in the praise of sun god Savitri.

Tenth Mandala contains Purusha Sukta from which is considered to be the source of varna system.

The Yajur Veda mainly contains the details about various rules/rituals that were to be said by a priest at the time of sacrifice/Yajnas. In short, this is a book of sacrificial rules.

This has also been divided into Black(Krishna) Yajurveda and White(Shukla) Yajurveda.

It is called the book of music and chants.

It sets the hymns of Rigveda into rhythm. The origin of Indian classical music can be  traced to Sama Veda .

Atharvaveda describes the early traditions of magic and cure of diseases. It is also called the Veda of magical formulas.

It contains around 730 hymns.

Atharvaveda was mainly composed by two groups of rishis/Vedic scholars known as the ‘Atharvanas’ and the ‘Angiras’. Therefore, previously it was also called ‘Atharvan-girasa’.

The Brahmanas are the prose texts which provide explanation and meaning of the hymns of Vedas. Each Veda has its own Brahmanas. Below table lists the most important Brahmanas which are associated with their respective Vedas.

The Aranyakas are the forest books which were written for the Rishis and students living in the forests. They are the concluding portions of the Brahmanas, however, because of their distinct character, they are categorised as a separate group of literature.

There are only seven Aranyakas available and there is no Aranyaka attached to the Atharva veda.

Upanishads are considered the last layer of Vedic literature therefore they are also called Vedanta. Their subject matter is Philosophical and they mainly deal with matters like Atman( soul/Self), Brahman ( Ultimate reality ), rebirth etc.

Conversation of Yama and Nachiketa is the subject-matter of Katha Upanishad.

Satyameva Jayate in the National Emblem has been taken from Mundaka Upanishad.

This completes the study of Shruti literatures of Vedics period which are considered most sacred and authoritative. Let us now read about the Smiriti literatures.

Remember: Smriti literally means ‘that which is remembered’. They are the post Vedic Classical Sanskrit literature which are considered less authoritative than Shruti. They are supplementary work and might change over time.

Puranas describe ancient legends and consist of genealogies of kings, history of the universe from creation to destruction and philosophy of Hinduism. Several Puranas are named after major Hindu deities such as Vishnu, Shiva, Brahma and Shakti.

There are 18 major Puranas. Some of the important ones are :

Matsya Purana is the oldest Purana. 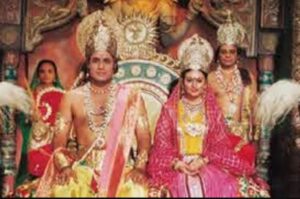 Ramayana is one of the two major Sanskrit epics of ancient India, the other being the Mahabharata.

Created by Maharishi Valmiki, Ramayana narrates the life of Rama, prince of the legendary kingdom of Kosala. The story follows his fourteen-year exile to the forest urged by his father King Dasharatha, on the request of Rama’s stepmother Kaikeyi, his travels across forests with his wife Sita and brother Lakshmana, the kidnapping of Sita by Ravana (the king of Lanka ), which resulted in a war and finally Rama’s eventual return to Ayodhya to be crowned as a great king.

The Mahabharata is attributed to Maharishi Vyas. 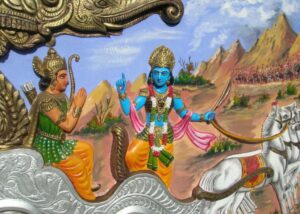 It narrates the struggle between two groups of cousins in the Kurukshetra War and the fates of the Kauravas and the Pāṇḍavas.

The Mahabharata is the longest epic known and contains 1 Lakh verses and 1.8 million words which makes it 4 times of Ramayana.

There are Six Vedangas which are associated with the study and understanding of the Vedas.

Upaveda or ‘Applied knowledge’ are the traditional literatures which deal with subjects which are technical in nature such as Economics, Military Science, Music and Dance and Medical Sciences .

They are as follows:

Āyurveda: Deals in Medicine and associated with the Rigveda

Dhanurveda: Deals in Archery and associated with the Yajurveda

Gāndharvaveda: Deals with Music and Dance and associated with the Samaveda

Arthveda :  Deals with Economics and associated with the Atharvaveda

Shat-Darshana are the six traditional philosophies or schools of thought that originated in the Indian subcontinent with contributions made by various individual thinkers over many generations.

Vedanta school further separated into six sub-schools, with each school producing its own series of commentaries. You can read more about sub-schools of Vedanta philosophy here.

This completes our study of vedic literature. However, we are not done yet.

Revision is the key to success in Civil Services exam. We understand this very well.

Therefore we have included a Quick revision guide and Mini mock test to help you revise quickly and effectively. Enjoy !!!

In the next chapter we will study salient features of Rig-Vedic/Early-Vedic culture(Social and political life, Religion, Economic condition etc.).