Vedānta and It's Sub-schools

Vedānta(Also known as Uttara Mimamsa)  is one of the six schools of Hindu philosophy. Literal meaning of Vedānta is “end of the Vedas”.

The Vedanta school concentrates on the philosophical teachings of the Upanishads rather than the rituals and sacrifices given in Brahmanas.

Based on the different philosophical interpretations of the Vedas ( Mainly Upanishads ), Six different schools emerged under the Vedanta philosophy. The main focus of these schools was on the nature of the Brahman and its relation with Atman(Soul).

Let’s study them one by one.

This was the most popular school and it was propounded by Adi Sahnakar and his Guru Gaudapada.

It believes in absolute monism( Or absolute non-dualism).

It states that both the individual self (Atman) and Brahman are the same.

Brahman is the only reality, and the world, as it appears to us, is only an illusion. Brahman has no qualities or attributes and it is completely indivisible.

The teachings of this school were vehemently opposed by other Vedanta philosophies because of Its similarities with Buddhism.

This school believes in absolute dualism and was propounded by Madhvacharya.

This school considers Brahman and Atman( Individual souls) as two separate entities and suggests Bhakti as the route to salvation.

This school believes in non-dualism with some qualifications. Hence it was also called qualified non-dualism. It was propounded by Ramanuja.

In this school, The Brahman is conceived as a person with qualities and attributes.

This school believes in monistic dualism or dualistic monism and was propounded by Nimbarka .

This school believes that the world has souls evolved out from Brahman, and it’s continued existence depends on Brahman. Individual souls are different from Brahman as they have their own attributes and capacities that are not the same as the Brahman.

Brahman has it’s independent existence however, individual souls can not exist independently without Brahman.

This school believes in  pure non-dualism and was propounded by Vallabhacharya.

It states that both Brahman and the individual self are one and the same.

But Opposed to Advaita philosophy, Shuddhadvaita does not regard the universe as unreal. It says that the World is the Leela of God that is Krishna and Bhakti as the only means of liberation.

This school believes in inconceivable one-ness and difference. It was propounded by Chaitanya Mahaprabhu.

It emphasizes that the individual self (Jīvatman) is both different and not different from Brahman. The precise nature of the oneness and difference is inconceivable in thought and inexpressible in words.

Hence, This school takes the middle ground between absolute monism and dualism.

With this, we conclude our study of Vedānta and It’s Sub-schools.

You can read more about the different Vedic literature here : Read Now 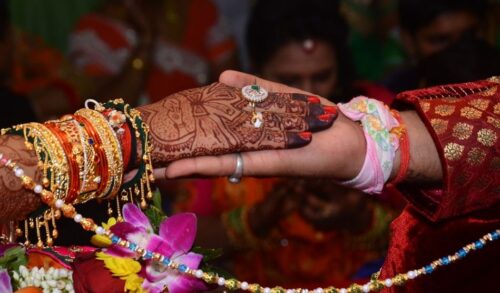 Read about the Different types of marriages in Vedic Period.