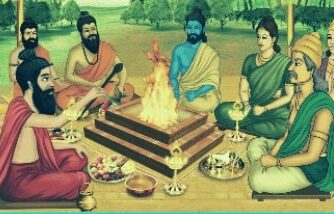 In the last article of the ancient history series, we studied the Rig Vedic period. With the help of Vedic texts, we got a fair idea about the polity, society, religion and economic activities of that period.

In this article, we will study the same features of the Later Vedic period.

As we already know, The period from 1500 BC to 600 BC is considered as Vedic Period which is divided into two parts :

During the Rig Vedic period the Aryans were mostly confined to the region called ‘Sapta Saindhava’ which included Afghanistan, Swat Valley of Punjab and some parts of the Indo-Gangetic plain.

In the Later Vedic Period  (1000-600 B.C),  Aryans further moved towards the various sites of upper and middle Gangetic plains.

Painted grey pottery has been extensively found from these sites due to which these sites are also called Painted Grey Ware (PGW) sites and their culture is also known as PGW culture.

It was succeeded by Northern Black Polished Ware from 600-500 BCE associated with the rise of the great Mahajanapadas. We will study about the Mahajanapadas period in next article.

Later Vedic period saw the gradual formation of larger kingdoms. Many jana or tribes were amalgamated to form the large janapadas or rashtras.

Royal power also increased along with the size of the kingdoms. Power and prestige of the king increased gradually and he became the master of all subjects.

The kings assumed various titles like Ahilabhuvanapathi (Lord of all earth), Ekrat and Samrat (The Sole ruler) to mark their absolute power.

In the later Vedic period, a large number of new officials became involved in the administration in addition to the existing officials like Purohita, Senani and Gramani.

Some of the new officials included the Treasurer (Samagrahitri), Collector of taxes(Bhagadugha), Mediator in Disputes ( Madhyamasi), Accountant (Akshvapa) and royal messenger.

At the lower levels, the administration was carried on by the village assemblies, however the importance of Samiti and the Sabha had diminished during the later Vedic period.

In the Later Vedic Period, power of Gramani increased as he now had both civil and military powers. In fact, Gramani was the medium through which the royal power was exercised in the village.

Many changes of great importance happened during the later Vedic period.

The most important among them was the evolution of the Varna System(which is still prevalent as a caste system).

The four divisions of society – Brahmins (Priests), Kshatriyas(Rulers), Vaisyas (Agriculturists, traders and artisans) and Sudras were clearly established in the Later Vedic period.

The two higher classes – Brahmana and Kshatriya enjoyed privileges that were denied to the Vaisyas and Shudras.

The vaisyas were superior to the sudras however their position was gradually deteriorating.

The condition of the Sudras was very miserable. Their work was to serve the other three castes.

The Ashrama System also became well established during this period.  As per the Ashrama  system, the whole life of 100 years was divided into 4 Ashrams. They were :

In the family, the power of the father increased however there was no improvement in the status of women. Women were considered inferior and subordinate to men. They also lost their political rights of attending assemblies.

However, the women of royal families enjoyed certain privileges.

Women and the sudras had no right to property. The eldest son would inherit the property of the deceased father.

Child marriages became common in this period. Birth of a daughter became undesirable.

The institution of Gotra also appeared in the later Vedic age to signify the descent from a common ancestor.

Marriage was prohibited between persons belonging to the same Gotra. 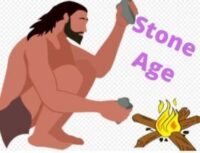