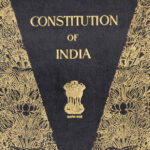 making of constitution of India

Study about the various stages and the stakeholders involved in making of constitution of India.

The Constitution of India is the fundamental and supreme law of the land. All the three organs of government ( Legislature, Executive and Judiciary) owe their origin to the constitution.

In this article, we will read about the various stage and different stakeholders involved in making of this organic document known as the constitution of India.

How was the Indian Constitution made?

Constitution was made by the Constituent Assembly which had been elected for undivided India.

This demand was finally accepted by the British Government in the ‘August Offer’ of 1940. However no further action was taken by British in 1940.

As the WW-II progressed, there was an immense pressure on British government to solve the constitution problem in India and seek active participation of Indians in WW-II.

In 1942, Sir Stafford Cripps, a Member of the Cabinet, came to India with a draft proposal of the British Government on the framing of an independent Constitution of India to be adopted after the World War II.However, The Cripps Proposals were rejected by Congress and Muslim League.

The Cabinet mission arrived on March 24, 1946 and announced its recommendations on May 16, 1946. The scheme for the Constituent Assembly which more or less satisfied both Muslim League and Congress.

Hence, The Constituent Assembly was constituted in November 1946 under the scheme formulated by the Cabinet Mission Plan.

As per the scheme formulated by the Cabinet Mission Plan :

The total strength of the Constituent Assembly was fixed to be 389. Of these, 296 seats were allotted to British India and 93 seats to the princely states.

Each province and princely state were allotted seats in proportion to their respective population. Roughly, one seat was allotted for every million population.

Seats allocated to each British province were divided among the three principal communities–Muslims, Sikhs and General in proportion to their population.

Constituent Assembly was neither completely elected nor completely nominated body. It was a mix of both.

Representatives from the British Provinces were elected by the provincial legislative assemblies by the method of proportional representation by means of single transferable vote.

Hence, we can conclude that the Constituent Assembly created to frame the constitution of India was partly elected and partly nominated body.

Constituent Assembly met for the first time on 9th December 1946.

On this day, Dr. Sachchidananda Sinha was elected as the temporary President of the as he was the oldest member of the assembly.

Later, Dr. Rajendra Prasad was elected as the permanent President of the Assembly.

H.C. Mukherjee and V.T. Krishnamachari were elected as the Vice-Presidents of the Assembly.

On 13th December 1946, Jawaharlal Nehru presented the historic ‘Objectives Resolution’ in the Assembly which laid down the fundamentals and philosophies based on which Constitution was to be made.

Later, this Objectives Resolution with few modifications became the Preamble of the constitution.

All the points of Objectives Resolution are not important for exam and need not to be remembered. However, to give you a context, we are listing few important points of the objective resolution:

On 22nd January 1947, The Objective Resolution was unanimously adopted by the Assembly.

Once the fundamental philosophies of the constitution to be made were clear and adopted unanimously, the actual work on constitution making started.

To perform various functions of constitution making, the Constituent Assembly appointed a number of committees. Out of these, eight were major committees (You need to remember their name and chairman as this factual information is asked in various exams) and the others were minor committees.

Major committees of the Constituent Assembly:

Advisory Committee on Fundamental Rights, Minorities and Tribal and Excluded Areas (Number 5 above) had various sub-committees (They are also important so I am listing them below).